NaslovnaEnglishTakaakira “Taka” Goto (MONO): Music is something that can express things you can...
15/04/2019

Takaakira “Taka” Goto (MONO): Music is something that can express things you can’t simply with words 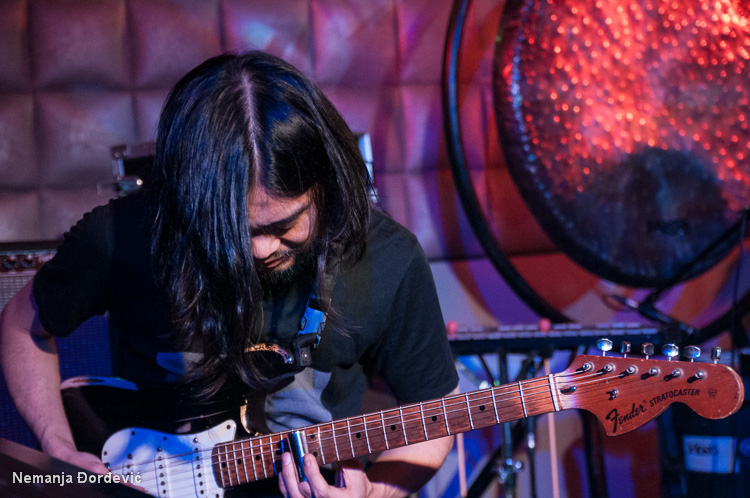 The Tokyo, Japan based 4-piece Instrumental Rock band MONO (Taka – Guitar, Tamaki – Bass, Piano, Yoda – Guitar, Dahm – Drums) was originally formed in 1999. Their unique approach of combining moving orchestral arrangements and shoegaze guitar noise is held in extremely high regard; so much so, that the band’s musicianship and the diverse musical palette has eclipsed the Rock genre and exists within its own realm. As British Musical Magazine NME once stated, „this is music for the Gods“. A particularly monumental live memory of the band was a special set of shows with a 23-piece orchestra in New York, Tokyo, London and Melbourne.

The band has now completed recording their 10th album “Nowhere Now Here”, which was released worldwide on January 25, 2019 to coincide with their 20 year anniversary. The album was once again produced by the band’s longtime frien Steve Albini at Electrical Audio, Chicago.  This month we will welcomed MONO again after a long time in Serbia at 24. April and day after in Croatia. For that occasion we wanted to represent our musicians of „music for the Gods“ through following interview. Guitarist and composer of the band Takaakira “Taka” Goto openly spoken for Balkanrock about dark times in the band, how new album gave them rebirth, and also about why he thinks the band has made so far and what’s their secret of success.

Balkanrock: How would you describe your latest album „Nowhere, Now Here“ released on 25 January? Did the new stream of members affected on the final product when it comes to sound? 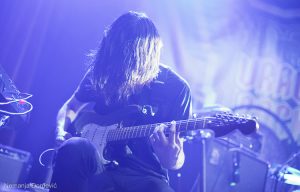 Takaakira “Taka” Goto: „Nowhere Now Here“ became a musical trail of all the troubles we faced as we walked towards our new chapter. In 2017, because of our troubles and termination with our Japanese management and label, as well as our drummer’s departure, we were in a state of not being able to take one step. We didn’t have any of our schedule locked and we were all in the mood of „if it was a regular band, this is when they’d disband“. We were really in the dark and couldn’t see anything ahead. We were in a crucial time of needing to decide whether the band should reborn or stop its activity. In result, I left a story about regenerating from the pitch-black darkness which felt like “nowhere”, then through dawn, welcoming the new chapter “now here”. I thought the only way I could get out of this darkness was by writing songs and keep on moving forward, so I just kept on writing as my feelings took me. This album portrays a story about parting with the past. From wondering a pitch-black darkness filled with hatred, anger and a sense of incongruity in the deep pit of your heart, to facing yourself and fighting through struggles, hidden light and hope of what you wish to remain, then eventually in the last scene “Vanishing, Vanishing Maybe”, you part way with the past.

BR: When would you compare the last studio album with the previous one, where would you place it?

Taka: Since „Nowhere Now Here“ was our first album creation with our new drummer Dahm, I feel that it turned out to be an album filled with freshness like a debut album and initial impulse. Right now, the band feels that we finally found that one answer we’ve been looking for a long time.

BR: In short documentary movie MONO, band is more introduced to public as ‘idealistic quartet which uses only few words, speaks only with body language’ –which are words of band’s longtime friend Steve Albini (Electrical Audio, Chicago). Also your music is based on orchestral, instrumental with very few shade of voice (in song Breathe). Why is that so? Should this send a message to the public that they should work a bit more on their feeling, charisma, telephaty etc. or because you are more collocate with this type of music? 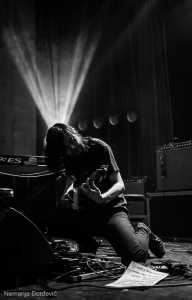 Taka: I think music is something that can express things you can’t simply with words. For me, music is about going deep inside your heart and putting a light in that pitch black darkness. While that is a very dangerous thing to do and if you make a mistake, you yourself may get sucked into that darkness and madness, but without doing so, I don’t think you can express any true hope. I believe the music that comes out of that process can pull out dignities from people as human beings, that surpasses nationalities, cultures, histories or languages. Since a long time ago, I’ve been a fan of music like film soundtracks that visuals float in your head while listening. After a while, I started to think I wanted to mix those elements with Rock music and that’s when I started to self-teach Classical music. After all, Classical music is also the same instrumental music. In the beginning, however, because we’re basically a standard 4-piece Rock band consisting of guitars, bass and drums, things didn’t go as imagined but after experimenting many ways, we eventually were able to find what we can call our own style of playing and by using pedals.

BR: Taka, you said that MONO should release their 10th album on 20th anniversary of existing. Was this ever in question as (for ex. drummer Yasunori Takada left the band)

Taka: 20th anniversary and the 10th album together is something I’ve been conscious about for many years now, but this time, we were not really in the mood to celebrate. Because upon welcoming our 20th anniversary, we had to face many kinds of troubles. So for this album, I wrote the album with the feeling of finding one light in the pitch black darkness filled with anger and indignation. There were many tough times in the past but this time was very strange and miracle feeling. I didn’t think we would welcome our 20 year anniversary like this. In order to continue as MONO, it was the time for us to underpin ourselves greatly. I have to say some invisible great power just made this work. Through so many different kinds of troubles, we managed to become what we should be. Now the band is filled with fresh strong energy like we were reborn. We feel that our new chapter has come. Also, you know you’re of course bound to face many kinds of problems if you continue a band for 20 years. I always think and feel that the „time of adversity is when you can understand life“. We always got stronger by swimming against the waves, and the most important and valuable thing in life is deciding what kind of dreams you want to dream for yourself. 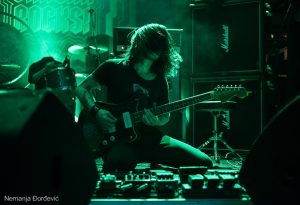 BR: How does creation process looks like? What comes first? How much time do you contribute in one song?

Taka: I don’t particularly have a rule. The only thing I’ve set my mind for is that when I start writing songs, no matter how the result may be, I always make sure to finish the songs completely regardless of whether if I will end up using them or not. There are songs that took a year to write, and some that only took 4 hours. When the songs are almost complete, I start to organise them thinking about the flow of the album, like so the album turns out to be like a film.

BR: What’s the most boring thing when the band goes on a world tour?

Taka: It’s never boring, but I really miss seeing my family and local friends for a long period of time.

BR: A collaborative short film, directed by French director Julien Levy  inspired by MONO’s newly written material „After You Comes the Flood“, caused divided reactions by public. Many of them liked it but there is (quote): „Hope this is the only video from MONO that I have to dislike. I really don’t want to but it just pain me too much to see this „film“. This song triggered my instant purchase through bandcamp and now I have to see it in this form. Why would such an amazing song is expressed in this such amateurish and cringey manner. The film reminded me of all the edginess and awkwardness from teenagers. I’m sorry, the song and the video just doesn’t work., what is your opinion about it? 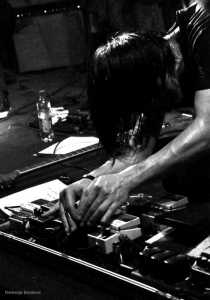 Taka: I’m very close to Julien, the director. We have a very similar sensibility. He currently resides in Tokyo and whenever we get a chance, we go out for drinks and talk about art endlessly. I personally really like how he feels and portrays Tokyo; the feeling is chaotic, lonely like there is no true place for yourself, and you can’t find what you believe in and deep inside your heart is screaming. I really enjoy collaborating with Julien. We give each other inspirations. For this album, we got him to give titles to each song and wrote the lyrics for „Breathe“ together. For „After You Comes The Flood“, we decided to not release it as a single’s music video but rather, release uniquely as our collaborative short film.

BR: You have performed in our region several times and it has always been very good. which is your secret of perfect sound wherever you perform?

Taka: We feel pure endless happiness when we’re working on our music more than anything else in the world. The fact we can devote ourselves like this is truly the most satisfying thing in such a deep level.Even now, we have the same hunger as when we were young. „This is not enough“, „we want to explore deeper“ and „we want to keep on moving forward“ are our most important motif, not just for music, but to live.

BR: Any words for the audience in Serbia and Croatia expecting your performance with impatience?

Taka: I’m really excited to be playing in Serbia and Croatia for the first time in a long time. Since this is our 20 year anniversary, we plan to play the best setlist, consisting of both new and old songs we haven’t played in a long time. We’re really looking forward to seeing everyone! Thank you and see you soon!