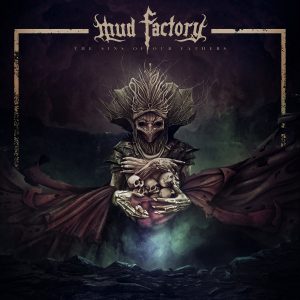 It was long overdue but now the time has finally come for our ears to encounter what the boys from the band Mud Factory have cooked up during last year in the studio of one of the most prominent metal music producers – Fredrick Nordstrom, well-known for his work with At the Gates, Arch Enemy, In Flames, Opeth and many other bands. The information that the album “The Sins of Our Fathers” is being mixed in the studio of such a big name has exponentially raised the bar of the fans’ expectations but it had also drawn in listeners, who were not familiar with the band’s work until now.

This album was on the verge of falling into oblivion and even completely written off, but then, from out of nowhere, like a strike of a lighting we were hit with the first single “As I Watch Them Fall”, the first song on the album. A strong opening, where the first notes chase away even the smallest doubt about the sound quality of the song. Such power, such a well-groomed groove and above all, fearless and determined vocal interpretation, and yet again, all falls well into place and makes the single an enjoyable listening piece and, dare we say, a bit mainstream. After this song, there is absolutely no doubt you will waste no time and start diving deep into the album.

The sound of the album is definitely the biggest highlight. Not just for its flawless production but also because of the decision brought by the band and producer to put the rhythm section in your face while the guitar stays in the background, supporting the avalanche of groove and giving it a good edge and melody. Another great aspect of production is the embellishment of the vocals with different tones and characteristics which gives each song ferocity while at the same time making them more modulated than it is usually the case with other albums within this genre.

On the second song of the album, “You All Will Suffer”, we welcome a guest, Vojislav Višnjić, frontman of the band Stvor, who shows us that the music of Mud Factory can fit quite perfectly with a clean vocal as well. In fact, they might consider using it more often. In this song, we also discover that the band can sometimes slow things down and create an extremely melodic chorus that resembles something it could only be heard in the Balkan region, coming from the Croatian band KRYN.

Every album has its weak points and on this one we can hear it in songs “Self-Proclaimed Being” and “Essence of my Being”. They both stand alone as separate pieces with well-formed, dynamic arrangements that possess details other songs from the album are missing, especially the parts where the tempo is slow, the listener can rest and then comes a hard punch in the face with the following part. Lyrics should also be mentioned in this context because they accentuate two major themes on the album. The first theme is developed through the character of Antichrist, who we encounter several times, preaching both directly and indirectly about the inevitable doom of the human race and “making him their king” by doing atrocities. The second theme revolves around the individual who battles his demons who are, if we are to judge by the emotional performance and strength of the vocals telling the story, so much scarier than the picture of the apocalypse. Even though both themes are equally interesting and powerful, based on the same groove we come across in other songs, they begin to blur the lyrical landscape of the album. This can have a contradictory effect and become tiresome for the listener and also make it hard to separate one song from the other and even hard to memorize some specific part which has interested him in the first place. The situation is the same when it comes to the vocals which have pulled every trick from the bag so far and which too, can become a bit hard to listen to.

“All Shall Be Erased” shifts the impression from the previous songs and brings us one of the most playful riffs on the album. The greatest feature here is the arrangement which sails on fast, maddening sections, pushing and shoving your entire body. Special praise should be made to the bridge part that starts third minute in and can stand tall with great bands such as Gojira. Mud Factory shows us that they are one of the few bands who are able to produce that kind of bridge and make it sound natural and not overcalculated.

The album shifts its direction on “In My Inferno” and builds up the tempo gradually. Besides the opening song, this one is certainly the most commercial step in a musical sense and perhaps, demonstrates the bands capability to make a song which is based exclusively on a heavy groove and melodic vocal parts without displacing the guitar and letting it make the sound greater and sharper. If you add the apocalyptic aspect of the lyrics, this kind of melody fits the song perfectly. Gloomy, pessimistic and austere.

We are coming back to the good old restless and fast path of the album with the riff of “They All Deserve to Die”, which throws the listener in the air like one of the most furious Slipknot songs from the album “Iowa”. The entire bend speeds through the song with no restraints, leaving only a cloud of dust behind them. Near the end, we come to the great downtempo and the retreat of the instruments leaving the vocals of Milanović dispersed and composed through several variations, which makes your spine shiver while the head voice from his throat produce some of the sincerest but also pessimistic lyrics we encounter on the album:

“Between the Dead and Me” is a song that definitely should have come along earlier on the list, a piece that reveals another great aspect that has been shown to us in small details on the previous songs. At the very end we have been given the slowest, darkest, most expressive and sluggish song from Mud Factory, made out of variations of a simple, yet memorable and powerful riff. This is the part you have been waiting for all along and you will play it over and over again. The tempo of the album drops so suddenly, you can feel the air become “leaden” and too heavy to breathe, which makes this song such a highlight. Diving into the more aggressive sound is great but the most powerful sensation is the part when the band comes back so abruptly to the entering riff and seal this chapter.

“The Sins of Our Fathers” is a debut album that many can only dream of and it was made by a band from a city in the Balkans, Vranje. This musical piece is made out of a strong groove, raw and sincere emotions and ferally powerful vocals, who by joint forces mercilessly stomp over everything that stands in their way without looking back. Mud Factory has everything it takes to become a well-known band beyond the regional scene and join the big names on the world metal stage. The boys have the necessary drive and it is important to keep progressing and developing their sound and not give up by any chance. All that remains is to wait out this pandemic and finally hear the album live because, as it is perfectly clear from just hearing it, the power that this band has will be at its strongest. Literally, in your face.