INTERVIEW | Courtney Taylor-Taylor (The Dandy Warhols): “It’s always easier to destroy than it is to build”

As the The Dandy Warhols Spring Tour is wrapping up, we managed to catch Courtney Taylor-Taylor in Vienna and do an interview with the man. The charming Portland, Oregon rocker gave us a certain kind of insight into the band’s life and modus operandi, into things he likes and his favourite music, he gave us a couple of details about the new Dandy Warhols album, mentioning along the way the connection between Peter Griffin from “Family Guy” and Peter Holmstrom, the shy guitar player of the The Warhols…

Courtney: To be honest, it becomes exhausting when the third week starts. Two weeks are great for tours, but the third week is when it gets rough. I want to kill myself today, that’s how I feel. Also, Zia’s got a migraine for a few days now and when one member is sick the whole band is. Not only we miss her on the sound-checks, but it feels that the whole thing is falling apart like a house of cards. We can’t wait to go home.

BR: Sorry to hear that! What’s the craziest thing that happened on this tour?

Courtney: Well… the craziest thing is that I haven’t drank anything stronger than wine. I really like the French wines I got to drink on this tour.

BR: New songs crop up on the setlists on the tour. New album coming up?

Courtney: Yeah, three of them (Somethings you got to get over, the current single Chauncey Pendicott vs All The Girls In London and Pope Rev Jim). There’s a new album coming, it’s half done. It’s going to be very…guitar heavy.

BR: We crossed, like, 500 miles to see you guys. Is there any band for which The Dandy Warhols would cross that length? 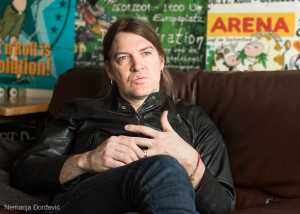 Courtney: (pause) Uh-uh. I don’t think so. But we have a different perspective because we know will just run into them at a festival this summer. But if, like, The Greatful Dead would come back to life. If people would come back to life, I would see Elvis, The Greatful Dead. There’s no place I wouldn’t fly to to see Black Sabbath when they were, like, 22 years old. AC/DC with Bon Scott singing. But now…um, I think I’d go and see Brian Jonestown Massacre if the line-up was like in the movie (“Dig!”, igrano-dokumentarni film iz 2004. godine, prim. aut.).There’s no distance I wouldn’t cross to see that.

BR: Is anyone still insane in the music industry nowadays?

Courtney: Well I haven’t seen a band as crazy and fucked up as BJM was. I mean, there were fucked bands, but the unusual part was that the Brian Jonestown Massacre was so good. It’s still one of the greatest catalogues of music ever created by anyone.

BR: There’s no feud between you guys now, right?

Courtney: You know, that’s (“Dig!”) not a documentary, it’s a movie and reality TV hadn’t been invented yet, so… Nobody really understood that, they thought that was real. I don’t think there was anything that we said in that entire movie that wasn’t told to us to say or do. The filmmaker went all “Come on, you gotta go do this! Will you just say this for me?”. And I’m sure it was easy for her to go in a van with those guys (BJM), in a stinky, smelly van, after a month of touring and go “I heard The Dandys are huuuuuuge in Europe! You guys are still stuck in a van! How’s that make you feel? Have they called you? You hear from them? They don’t call ya? They probably forgot all about you, how do you feel about that? Fuck those guys!”. And it’s that easy. You can make whatever you want. I can make your mom look like a fucking rapist in one conversation with some editing. That was a brutal lesson. (chuckles) I mean, it made us both legendary, it made us hugely influential and it feels good to have that, but had I known it was gonna hang around forever, I would’ve gone and edited it and said “You can’t do that! You can’t do that! You can’t do that! You have to show you telling me to say this. If you want to put that scene in there, you have to show your part in it too, ’cause you’re a bigger part of this than anyone”. The filmmaker lady is a really really bad person, really icky icky person. Not somebody you want to get in business with. But, you know, we were young and naive and all “We’re in this together!”…

BR: Yeah, that youth still can be heard in your music. How do you guys manage to keep it that way after more than 20 years?

Courtney: Cocaine (chuckles). I have no idea man, I look at us and I think “Wow!” we’re the same fucking band!

BR: You guys have a lot of hobbies… I know that Peter is a photographer in his free time…

Courtney: Yeah, Pete’s a great artist just like the interior designers in Chicago. He’s one of the first stencil graffiti artists in the world, he may have been the first stencil graffiti artist in the world… Peter was doing that in the 80s, before it was cool. He went to NYU, graduated with the Bachelor of Science and Art. You know the show “Family Guy”? 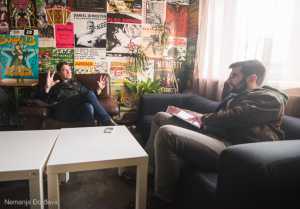 Courtney: Do you know when he (Peter Griffin) won the lottery and bought a mansion? When he’s showing his art gallery and he goes “This is Degas! This is a Picasso! THIS is some guy from New York City!”, that guy is a Pete Holmstrom, from the late eighties. You know, he really liked the art for the band The Power Station and his mom is from South Africa and is a professor of South African studies so he’s heavily influenced by that African profile art. He kind of developed a crossover style of the African art and the Power Station. If you watch the commentary version of that FG season, they said “We were at RISD (Rhode Island School of Design) in the late eighties, and we went to NYC all the time and we saw this guy’s work everywhere. He would put all his stencils all over the East Side”, which was where Pete lived. He used to put his stencils up and spray a layer of color and than add another the next day and so on. He got the depth of field… So they said “We took pictures of this guy’s art all over the place and put it an art gallery and later someone recognized it and said they knew him and said ‘I think he became a guitar player for some band…I think…Marilyn Manson'” (laughs). I told Pete about that and he was like (makes a bored face).

I used to be a mechanic, I used to be into motorcycles and transmission control module repair, I’m into wine now. I like to collect wine and I don’t hold on to it just to sell it, I just like to drink it all. I also designed riding boots for John Fluevog, a Canadian designer. They called me and asked me to design a pair and I said: “Well, I’m gonna make boots, and they’re gonna be the boots you should’ve made ten years ago!”

BR: You make movie reviews in one sentences on the band’s website…

Courtney: You know, it’s all it takes. There’s enough innuendo – you can really describe what the thing is and imply whether the thing is worth watching and how worth it is. You can really sum it up, you know. It’s easier to review bad movies. With good ones you have to say how is it good and what kind of good. It’s always easier to destroy than it is to build.

BR: But it’s nice when you build, so don’t kill yourself man – make new music!

Courtney: Well, today’s the lowest I’ve been in a long time. When we were in France it was great. The whole French tour…The food is amazing, France is amazing. French people are really classy, I mean, French people are a real class act. They are not gross, brutal or tacky, they’re just cool. We really enjoyed touring the shit out of that country, we’ll try and do it every year. We had such a bad time in Germany. And you don’t know why… Is it the entire culture? Is it just the guy promoting your show? Maybe they’re having an another show and they don’t care about you… You don’t know why, really… We just show up in this country every year and try and do this but no, it doesn’t work. It’s like Germany doesn’t like us… And you can’t tell if it’s the entire country or this one guy…I like Germany from the movies. I wrote comic book about Germany! These Germans, man…they just won’t like me. I can’t make them like me.

BR: How do you choose songs for the setlist? We never hear Heavenly live?

Courtney: We almost did that. Pete and I practice it a lot. I mean…We have a lot of songs. And generally, if they don’t come quickly and give you back a lot…You know, we play the song once live and if it isn’t just WHOA! we’re like “Fuck it, we’re not gonna put ourselves through that again!”. We’ve got, like, 128 song and it’s like “Fuck, we’ve got to choose 25 of them!”. You gotta learn them, play them, make them a living thing of their own that lives and breathes and creates elation, that emotional euphoric environment and sustain it all for, like, four minutes. And every night of this tour we’ve been able to find it, 90% of time. And it’s all on these antique instruments, and I mean, real instruments…

Courtney: Yeah, it’s great. It’s the most temperamental of all the guitars I got to play. It can be like a choir or it can be like the skinniest, cheapest piece of shit… The softer you strum it, the more of the choir it becomes. And the same song is different every time you play it. The new (Gibson) 355s have just one sound, and it fits that one song, but not any other sounds you want, unlike the Coronado…

BR: You and Pete sometimes share the rhythm/lead guitar roles. Sometimes you do the leads, like in Good Morning. Explain that?

Courtney: When we first started no one really had any idea what they were doing. He didn’t really know how to play the guitar. I mean, I was a drummer, Fathead was a guitarist/singer, Pete was a painter and Zia worked in a coffee shop. We basically learned this stuff together. I could play basic chords and so could Pete, but we had never played guitar in bands so we didn’t know what we were doing. So that’s why the song was so simple, I could definitely come up with a melody for a lead. So for the first two or three records I was doing the leads. And with the records coming every three years then, it means that by the third record it was, like, seven years and by that time Pete learned how to play guitar (laughs), he developed a style. He had one trick on the first record! He could do the hammer-on on Grunge Betty (sings the guitar part). 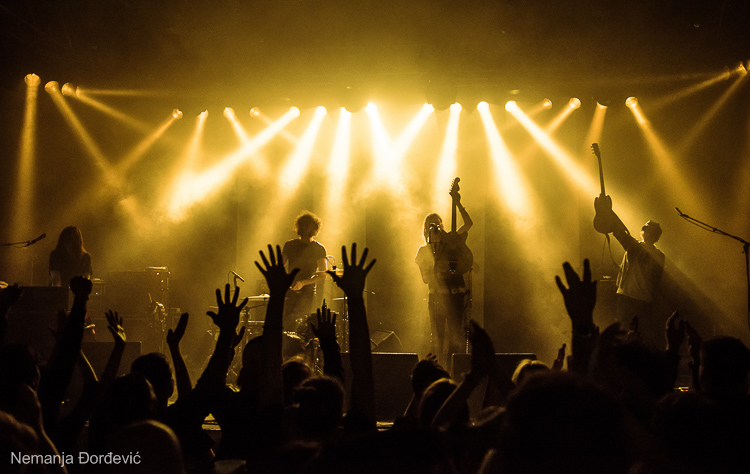 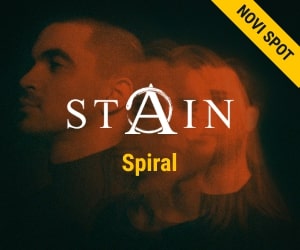