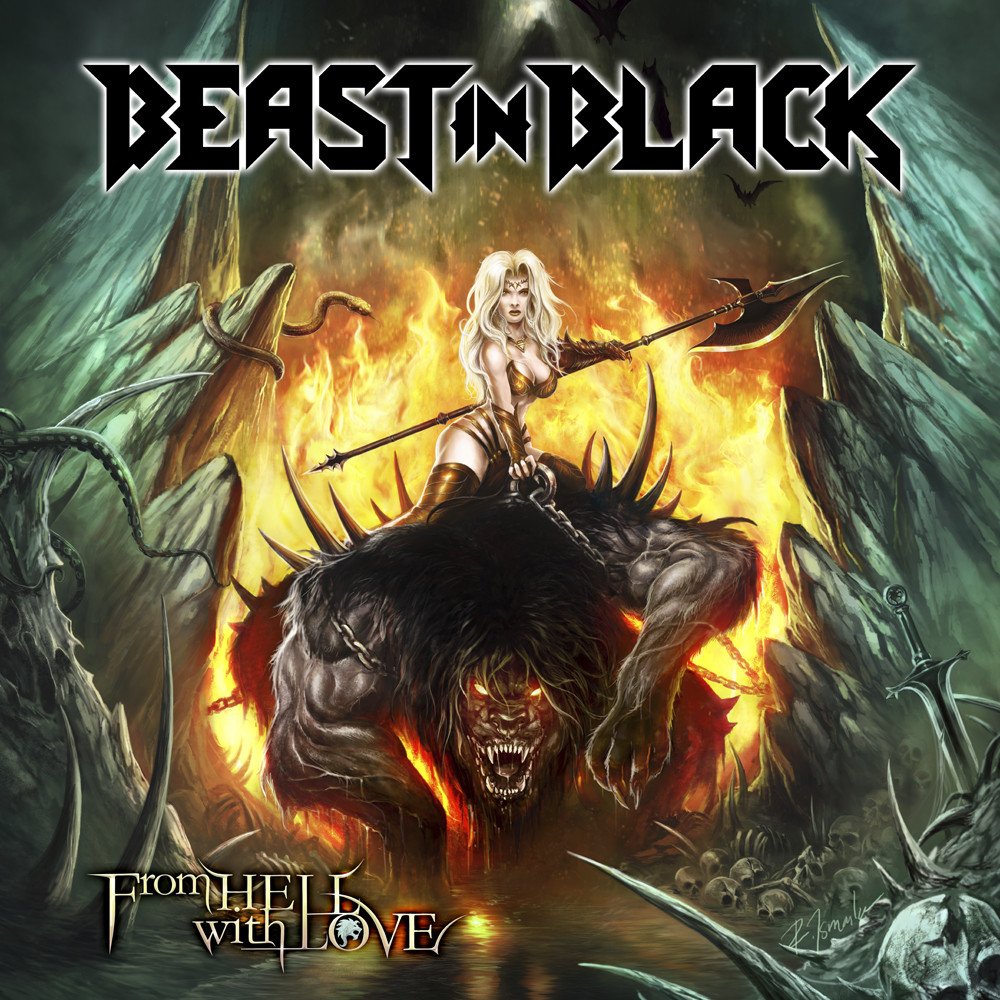 The year is 2019. Metal as a genre exists for half a century, which must be acknowledged as a notable fact, especially when considering how many ups, downs and crises it has overcome during this turbulent time period – fortunately, successfully. When we look at how divergent this direction is today and how many subgenres have emerged from the basic one, we can conclude only one thing: it encompasses everything and anything. It is unnecessary to list all these branches and twigs on which the fruits of metal are flourishing, because there are really too many of them; instead, we will just wonder: is it even possible to be inventive and original and to create something new and different which will come as a refreshment in already such a colorful and content-driven ocean of metal currents? Beast In Black enters the scene here.

Although they are officially from Finland, one would rather say that this is an international group, since members come from three countries: Finland, Hungary and Greece. A very interesting combination, which immediately “strikes the eye” because, as metal fans know, all three countries are a synonym for fantastic bands formed there, as well as die hard fans whose description says it all. BIB was formed during 2015 and with the release of the debut album Berserker in 2017, they became an instant attraction, with millions of views on YouTube and immediately established base of faithful followers. Even greater success for the band was the European tour with Nightwish in 2018, where they performed as a supporting act again (already happened in 2015 for the first time) – to release a one album only and open for the best Finnish metal group ever in arenas around the world and before 15,000 people, it’s not a small thing, right? Luckily, BIB did not wait long for the recording of new material and it was shaped into their second creation, the album of the flirtatious title, From Hell With Love, which has been released in February 2019 and will inspire the following lines devotedly.

But first, let’s get back to the above-mentioned story for a moment – why is Beast In Black a refreshment and what is the thing which originally set them apart from the crowd? As in countless other bands, here we also have quality, experienced musicians (who previously played in bands such as Wisdom, Battle Beast, Amberian Dawn, etc.), a great vocalist, a great composer/producer, excellent production and a number of other things which make a band compact and complete. But, as in those competitions where the famous X factor is searched for in a candidate, it could be said that in this case, we meet precisely with it. The stunning fusion of genres ranging from classic heavy through modern power metal, to disco and pop music of the 1980s and above all, the way it is combined and presented – it is definitely something you will not come across every day. The winning formula for success and the way to the audience is not easy to find, but some bands still have the luck and BIB is undoubtedly one of them.

Before the release of FHWL, the first single and video for “Sweet True Lies” was unleashed at the end of 2018. This song gave a fairly clear indication of continuation of the musical path Beast in Black established, i.e. what is now emphasized – the one & only and unrepeatable ’80s. However, don’t be confused – although this particular track is literally “screaming” those years, it is far from being a copy-paste product without any originality, on the contrary. The above-mentioned fusion here gets its original form and it sounds, in a word, bombastic. A tremendous energy of heavy power metal “spiced up” with melody and addictive nature of pearls of the aforementioned decade, can only ultimately result in what each performer is aiming for: a hit. The second single, “Die By The Blade”, was released shortly thereafter; here, we are already faced with more modern influences and the loudness and power of vocals of Yannis Papadopoulos is even more pronounced. Just as after listening to the previous one, as soon as it is finished, you will automatically click on repeat button and the chorus will instantly get under your skin – the (un)conscious goal is achieved and accomplished. Then, we face the album in its entirety – the album which is full of piquancies and surprises. What could be a surprise on the album which is already in itself, well, precisely that? Covers. Needless to say, there are two cover songs from this central decade about which FHWL revolves in great part, but their selection and the manner they were made “provided” BIB with two additional big pluses regarding this album. Robert Tepper’s “No Easy Way Out” has become even more “eighties” in the style of this beast and if you know this legendary song, you probably, like many others, wonder how this is possible at all – but it really is and only BIB members know how they achieved it. A bit of anxiety and skepticism are encountered when you realize that the second cover is no less than “Killed By Death” by Motorhead, which conceptually and musically does not exactly fit into this story, right? Wrong! Yannis’s vocal sections, as well as Anton Kabanen’s solos were brilliant here and the keyboards (yes, keyboards) gave the song a kind of refinement which would probably be approved by even Lemmy himself. Well done.

FHWL opens with “Cry Out For A Hero”, an explosive and fast track where Yannis dominates in high registers (which is normally in his wheelhouse) and where Anton’s smartly dosed shredding is rounded up by a short but sweet, easy-going bridge which then returns us into the explosion – to experience it in its entirety, for sure. “Heart Of Steel”, with its light start, makes us think that it returns us back to the 1980s and we realize that we are (partly) deceived in the chorus which irresistibly resembles Sabaton (as well as its name, after all), but then the game continues and by the end of the song we can no longer “catch up” with it – layered and even confused reactions of listeners are probably the best indicator that the listened material draws attention no matter how we interpret it, right? In a similar manner we are „driven“ by one more song, “No Surrender”, even though classic heavy metal influences are much more prevalent, which is best manifested through a little rougher climax and “blazing” solo “added” onto a strong and stable rhythm section which ticks (or shoots?) like a clock, carried by Mate Molnar and Atte Palokangas.

The third single for which the video was shot as well, the title track “From Hell With Love”, represents a constant shifting of heavy metal into a singable disco pop and at the same time presents the essence of the album itself. It is not possible to generally classify either this song or this album or the band and to just put it in one basket and it is very likely that this was one of the primary aspirations of its members which they achieved – From Hell With Love has set its own rules and does not care about standard forms. The game of this singing beast continues with “Repentless”, which is at least, if at all, “colored” by the decade of excess and mostly presents the contemporary age and power and heavy metal crossed in their full brilliance, with shifting double lead guitar parts of Anton and Kasperi Heikkinen, and snarling power which emerges from every second and “bites”. … poof! Now the whole snarling and explosiveness are left aside because we come across an almost unexpected “station” on the way to through this tracklist and the longest song on it, the ballad “Oceandeep”. The brake is pressed all the way to the floor, the fire has calmed down and it is just quietly blazing, while, no matter how cliché it may sound, the angelic voice accompanied by a remarkable instrumental background introduces us to the gentle side of the band – yes, even beasts have it, no matter what they tell you.

However, it would not be right for such a story to continue in a light and slow rhythm, still plenty of dynamite remained available. This is solemnly confirmed by another hit track “Unlimited Sin”. In its manic chorus during which the line “unlimited sin, unlimited power!” is tirelessly repeated, it seems as it proves that BIB really has the abundance of unlimited power which they used in the best way – by transforming it into tones that are continually radiating and hypnotizing those who listen. “True Believer” is the final and theatrical derivative of the eighties which would ideally fit into some of the movies from the famous “Rocky” franchise, but it certainly did its job perfectly here and added for the last time the intoxicating taste of the years which smelled of uninterrupted fun and vices. “This Is War” was intentionally saved for the end of this review. Even as probably the weakest song, it was still needed – to maybe remind us once again of the variety of genres we are intertwined with by listening to them and in an almost military, steel power metal manner, rages all the way. BOOM, the last second passed, the fires are still unstoppable, they are now only moved from the outside to the inside and are yet to be overcome – or mastered.

The year is 2019. Far behind us are famous days when small bands experienced dizzying success relatively quickly upon their formation, and while they were not aware of what was happening, they were already in the rocket leading them to the top. Today this seems like utopia, the one most groups inexorably strive for because what is more beautiful than well-deserved harvesing of fruits of their work and savouring their taste? Many give up on this journey, the obstacles they are facing seem insurmountable to them and they pack their dreams into bags which are moved to dark, dusty places where dreams blur and fall into bitter and always incomplete oblivion. Beast In Black has not gone along this path. From hell, with love, they have comfortably settled into a colorful, cheerful rocket fully filled with fuel and even when the red light on the tank blinks – they will replenish it and change the route just for a little bit. Whether they start from hell, heaven or some fifth dimension, they will move with this fundamental feeling which changes the world, a feeling which makes utopia real and gives hope to others that it is possible to reach it.

From hell, with love, Beast In Black. 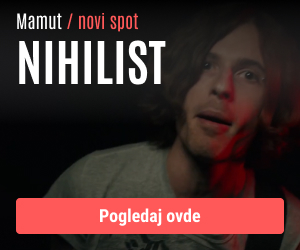